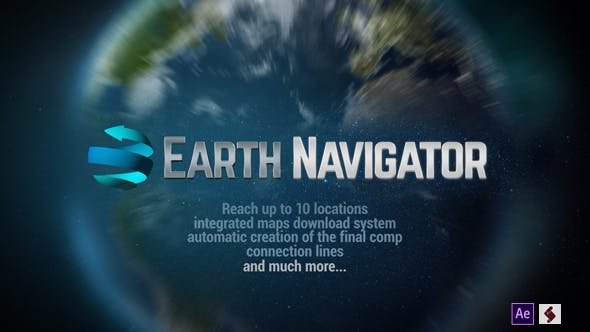 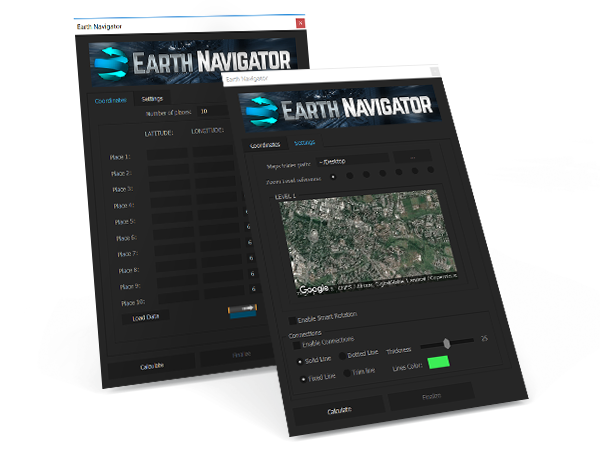 Earth Navigator is a powerful template based on an After Effects project, which is compatible with all versions of after effects from cs5 to cc, and a script that controls the project.
With Earth Navigator you can reach up to 10 locations in the world, simply typing their coordinates; the script will automatically calculate the rotation, the speed and the camera zoom.

The big feature of this project is that it doesn’t require long or complex customizations, because all operations are performed by the script.
When you open the project for the first time, you’ll notice something that you probably feel as unusual: the final animation to render doesn’t exist! In fact, the script creates this composition from scratch every time, calculating the number of locations, the duration of your footage and the Earth rotation speed.
Basically, your job will simply be that of selecting the number of the locations that you want to reach, set their coordinates, place your footage and launch the render.

Generally speaking, most templates allow to use your footage with a predetermined duration.
With Earth Navigator this limitation does not exist, so for example you could decide to arrive in Moscow and show a footage of 15 seconds, then move to Spain and show a clip of 20 minutes.
The animation will always be adapted to the duration of your footages!

The Trim and Adapt buttons

In order to speed up your workflow, the script integrates two useful functions: the trim button and the adapt button.
All compositions in which you place your footage are set to 10 seconds by default. If you want to place a footage of 2 minutes, you don’t need to change the duration of the composition and stretch the layer: you just need to press the “Adapt” button and the composition will be immediately conformed to the duration of your footage.
On the other hand, if you have a footage of 30 seconds, but you want to use only the first 5 seconds, you just have to move the time indicator to 5 seconds, then press the “Trim” button: the script will cut your footage adapting the composition to 5 seconds.

If you need to close After Effects or you accidentally close the script, with “load data” you can immediately recover the last input data (number of locations, coordinates, and Earth rotation duration) without the need to insert your informations from scratch.

Not just video footage but also maps: in fact Earth Navigator has a built in function that automatically downloads the map of your locations (from Google Maps), imports it into the project and places it in the correct location composition.
You can also select the level of zoom in each map.

Create connections between your locations

Another big utility is that you can create connections between your locations.
You don’t need to create or move the lines, because they are generated by the script exactly in the right position.
You just have to choose whether to keep the connections always visible or to show only the last connection line.
Furthermore you can change the style of the lines from solid to dotted, change the color and the thickness.

As you know, the longitude of the Earth ranges from -180° and +180°, so for example if your first location is Alaska (longitude: -149) and the second one is Japan (longitude: +138), the Earth should rotate by 287 degrees in order to reach Japan.
In the real world it would make no sense to go over Europe, in fact the most convenient route would be over the Pacific Ocean.
Luckily, Earth Navigator has another incredible tool: the “smart rotation”.
Enabling this checkbox the script calculates the shortest route by changing the rotation direction.
Note: if you enable the “Smart Rotation”, you cannot use the line connections.

Watch the video tutorial for free

Do you want to see Earth Navigator in action? Click on the image below and watch the video tutorial for free! 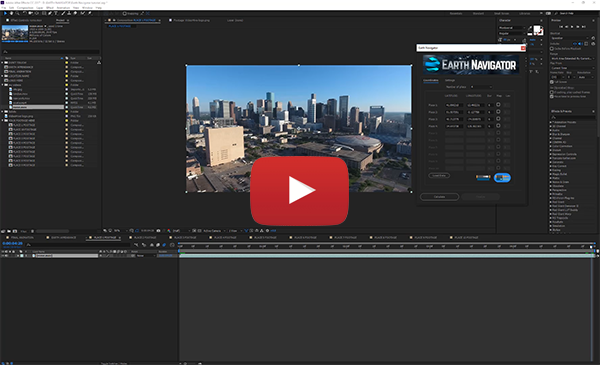 Music used in this video preview is not included but if you want, you can purchase it from http://audiojungle.net/item/epic-rock-star-anthem/3356920 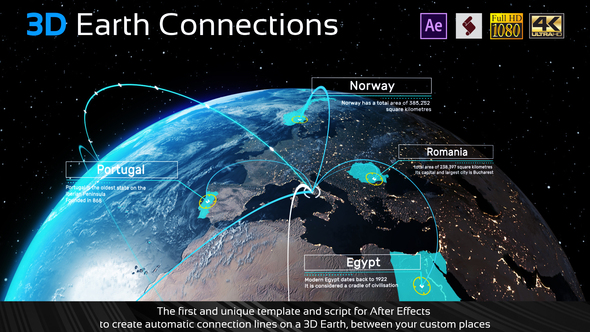 5.00 stars
5.00 average based on 7 ratings. (more information)
© All Rights Reserved marcobelli
Contact the Envato Market Help Team
Quick Links Explore popular categories
by
by
by
by
by
by