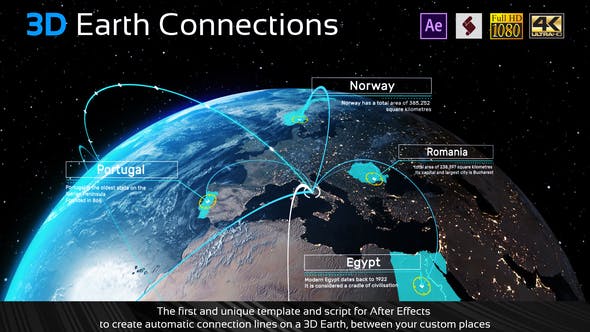 3D Earth Connections is a new template and script for After Effects CC2014 and above, that allows you to create connection lines between different countries on a 3D World model.
3D Earth Connections is not a simple pre-rendered animation with built-in connections on predefined places, which cannot be replaced or moved. With this template you can create your own animation choosing unlimited points to connect!
Use the included “location Finder” tool to find and place a pin on your city, region or country, select two countries to connect and press the “Create Connections” button!
3D Earth Connections project requires a plugin that you can download for FREE from www.videocopilot.net/orb
This Plugin has some system requirements, so before purchasing this template make sure to have them

How can I be sure that this script works on my machine?

The script doesn’t require hardware requirements, if you want to be sure that you can use this template, simply download and install the free plugin “Orb” from www.videocopilot.net/orb.
If the plugin works on your machine you can be sure that 3D Earth Connections will work as well!

Music used in the video preview is not included but you can purchase it from https://audiojungle.net/item/corporate-motivation/19255198