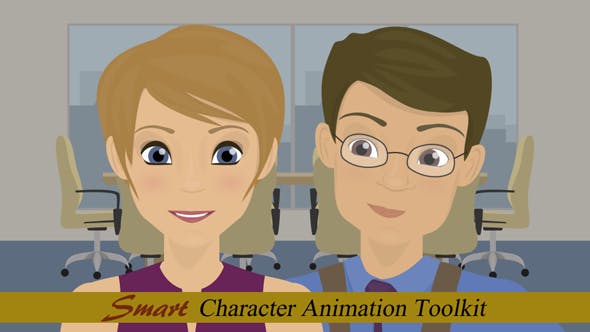 You’ve seen character toolkits with dozens, or even hundreds of animations. This project blows them all away.

The project is 100% drawn in AE and scalable as vectors.

The centerpiece of this project is the characters.

2 Characters: EACH Character has (more info below the line): That’s 103 commands to trigger 1172 body part animations.

PLUS, 3 Mouth Options to choose between the mouth following the mood, a generic speech loop for easy on/off lip sync, or manual lip sync.

In addition to the nicely drawn and easy to animate characters, this project includes 8 “Smart” cut scenes to show mobile devices with animated gestures:

AND, so that your explainer video will have a consistent look, we have included over 200 graphics and backgrounds drawn by the same artist. (See 2:37 in preview video)

Download includes a pdf help document with images. You can also view a Video Tutorial

Assets used in preview that are not part of the project:
Airport Stock Footage
Infographic Bundle
Ukelele Summer
Happy
Calling

For the Cut Scenes

View Portfolio
This item may not be property released.
© All Rights Reserved MMIndy
Contact the Envato Market Help Team
by
by
by
by
by
by