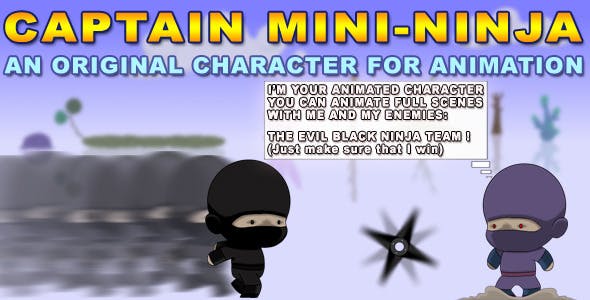 An Animated character contains many animated actions in YOUR CONTROL !
Now you can animate Mini-Ninjas to battle or do other stuff you wish.
Ideas are endless, Just Be creative

If you like this, you’ll LOVE:
DYNAMIC DUCK and MESSAGE MAN check them out

NOTICE:
The PREVIEW is only an example of what YOU CAN DO with the character, you still need the knowledge of how to use your software to combine everything and put effects like in this preview.
You can use Adobe Flash or any other software that import QuickTime movie files to create your own animations using this character.


- Frame by Frame smooth animated Ninja character.
- More then 20 Dynamic animated actions ready to be combined together:
Walk, Run, Jump, Kick, Punch, Throw Weapon, Fall, Punched (hit by others), Fly, Float etc..
- Some of the Animations have different speeds (Normal/Slow/Fast) all smooth.
- Captain Mini-Ninja built in a way that will allow you to replace his outfit colors.
(using After Effects or your other software that support such feature)
- BONUSES!
Weapon, Smoke, Talk-Bubbles, and a Soldier Mini-Ninja (Black Outfit) for your collection.
- Transparent (alpha) background.
- HD Resolution, 25 fps
- Soldier Mini-Ninja (Black Outfit)
- Ninja Star Weapon (Shurikan).
- Animated smoke.
- Animated HIT (explode Flash to show hits)
- Speak/Talk-Bubbles (Put anything inside, let your character say what he really thinks).
- AFTER EFFECTS CS3 SOURCE FILE example of a short scene for you to explore!


KRAZY KARTOONS – An in-house production studio who produces original materials such as:

CHECK OUT OUR ORIGINAL ANIMATIONS !!!