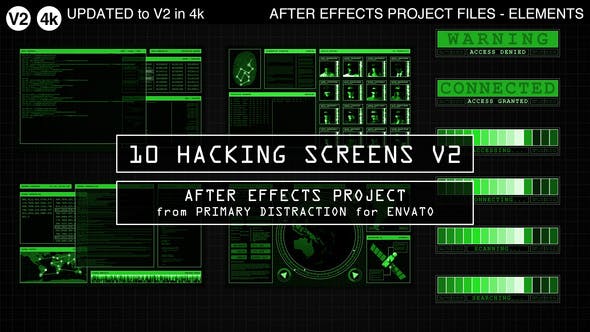 Inside are 10 different computer hacking interface graphics for you to edit and customize. There are four full-screen graphics as well as six overlay graphics. The entire project has been given a creative makeover, it’s now better than ever!

Designed as screen replacement graphics for film and television use 10 Hacking Screens V2 to help tell your story. There’s writing code, access denied, satellite surveillance and more! Use them in visual effects, motion graphics, as animated textures for 3D, as webpage elements, or‚ well anything!

Media:
The music in the Preview Video is “Hacking the System”. It can be purchased here:
http://audiojungle.net/item/hacking-the-system/8798270

If you have any questions or comments about 10 Hacking Screens V2 (AE) please send me a message through my profile page.

View Portfolio
4 Sales
3 Comments
Item Rating:   Minimum of 3 votes required
© All Rights Reserved PrimaryDistraction
Contact the Envato Market Help Team
by
by
by
by
by
by