Wind Turbines on the Mountain With Fog (Stock Footage)

Wind Turbines on the Mountain With Fog (Stock Footage) 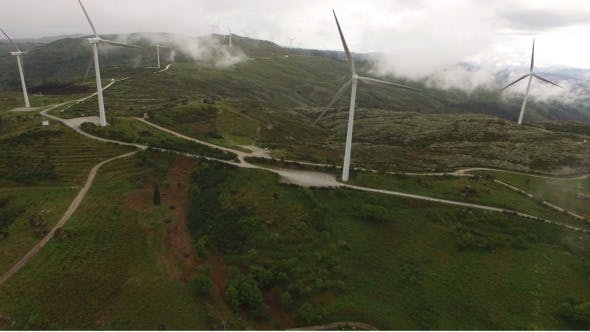 A wind turbine (or System Wind Power Generation) is an integrated electric generator to the axis of a pinwheel and that converts wind energy into electricity. It is a device that has become popular quickly to be a source of renewable and clean energy.

The use of wind turbines presents some benefits but also some environmental impacts:

impacts: Collisions with birds, mainly in small equipment. Erosion can be caused in sandy soils, the turbulence caused by wind turbines. In the vicinity of wind farms is detected noise pollution due to the noise produced. Some also consider visual pollution; Water consumption – cleaning the blades, when the site does not have enough rain to make such naturally cleaning. footprint for installation.

An additional technical constraint is the fact that the wind turbines can be installed cost-effectively in constant wind areas;

Basic composition of a aerogenerator

Isolated systems – are all systems that are deprived of electricity from the public grid. These systems store the energy of the wind turbine in stationary batteries that allow consume energy in seasons that this does not wind, preventing the power fails when the wind turbine to. But in order to be able to consume the energy that produces the turbine has to be changed, because the stresses produced are not compatible with household or industrial appliances, since the current produced is continuous and alternating current is desired. For that is used a sinusoidal drive current, which makes it even transforms the direct current into alternating current. This device is referred to as sine because the power consumed (in Europe) refers to 230 V 50 Hz (low voltage) or 400 V 50 Hz (for high voltage). These 50 Hz, when analyzed on the oscilloscope, show a chart with a sine. This is the function of an inverter, converting these to 50 Hz in order to obtain electric power equal to that of the equipment requirements. network in injection systems – are all systems that are part of the energy produced by them in the public power grid. In this case, most turbines are high pressure, only a very small minority of all wind turbines installed for this purpose is such as power injected into the network is much lower than a high voltage turbine.