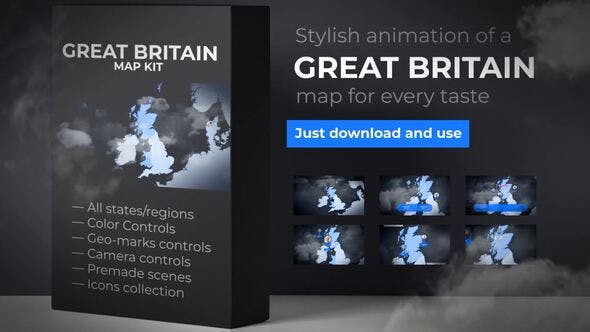 Hi This is the United Kingdom of Great Britain and Northern Ireland Map Kit. It will add to your video a stylish animation of a United Kingdom (UK) map for every taste.

The project contains absolutely all administrative divisions of the Britain.

In addition, each division is configured individually.

So just download the template right now and add a map to your project. Thank You.

This project is created to blow your mind and boost the workflow to the next level. Make your work faster and devote more time to creativity! map video display is the powerful weapon and must have product for motion designers, filmakers, vlogers and everyone who want to impress the audience.

It’s a infographics of geo scenes with vector map elements and regional lower thirds or titles with transitions that can be used to create geo opener.

If you have a 2d navigation map, meetup point, geo solution, map visualization, a company map, or just want to talk about your province, with this template you will have an excellent demonstration of features and story of your hud cartography promo.

24/7 item support if you have any complexity with this United Kingdom of Great Britain Map – UK Map – Britain Map project feel free to contact us via profile E-mail form. we will answer to you as soon as possible.

The audio file you can find here: map music

Image used on screens are not included world content by pixabay.com

Just edit the text description, photo, video and your map kit is ready.

Before buying please read the marketplace licence rules and FAQ about licenses. You can use the one-time purchase regular license to make multiple videos, but only for one channel, client, product, if you plan to use this template for commercial reason, you will need an extended license.

Use it for 3d Interactive opener, infographic slideshow about infographics, international reel, presentation of cartography event.

Customization of cartography scenes is as simple as possible. You can also create your own global presentations and reuse them as many times you want.

This is a complex tool designed for creating high-quality videos in the most simple but, at the same time, flexible manner. It will allow you to create any type of map video for any mapping topic, that is, promo and music video, slideshow, presentation, social media video, broadcast and more.