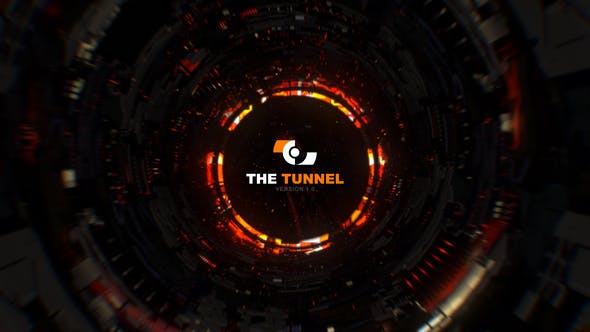 An abstract intro presented by a span along a futuristic tunnel (pre-rendered 3D scene), decorated with flashes of light and integrated placeholders for your content.

The project was originally conceived to demonstrate dynamic scenes, but if you are experimenting with background animation and music, I think you can achieve other results.

The project is also suitable for creating musical backgrounds, with the artist’s logo and clip fragments.

The “Intro” version is suitable for opening, with the transition to your main video without standard gluing to the joint.

The “Transition” version is suitable for integrating a screen saver between videos. For example, according to the scheme: the presenter’s appeal to the audience, then the screensaver, then the main video.
A feature is also the lack of standard gluing in the joint, due to the transition from video to placeholder with the same video, and at the end back from placeholder to video.

Important! After rendering, you will need to montage a screen saver installation with your videos.

The “Looped” version is suitable, for example, in cases of technical interruptions for an indefinite period of time and so that the viewer does not get bored, you can show him a cut of the best moments, decorated in the same style with the screensaver.

Note, the “Intro” version can also be easily looped if, at the stage of rendering or editing, the intro and ending are excluded (cut).

“Intro” version.
Duration 50 sec. It contains 5 placeholders for video and 5 for text or other materials.
The video begins with an introduction and ends with a transition to a placeholder.

Looped version.
The composition of the cycle lasting 30 seconds. after the material has been rendering, the video can be played any number of times without visible gluing.
It has one placeholder for video and text.
Note, the “Intro” version can also be looped if at the stage of rendering or editing to exclude (cut) the introduction and ending.

For ease of use, the project provides for the “Setup” composition for control, in principle it is intuitive.
The transition effect of the placeholders is based on a black and white image, which gives a huge number of options. Here you can experiment.
Lighting animation of the background is represented by four presets, but animation through key frames is also available.

To avoid problems, do not change the settings for color space, profiles, and color interpretation, that were saved in the project by default.

Music and sound effects are not included in the project!