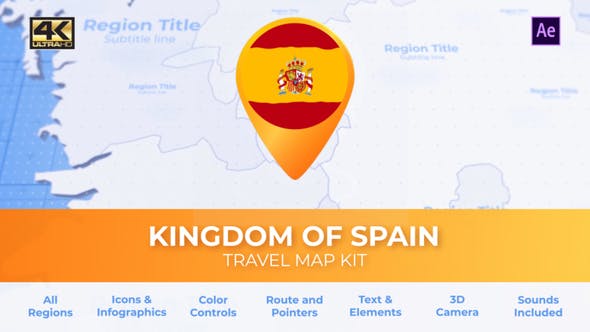 Hello, dear colleagues! By purchasing this project (Spain Map – Kingdom of Spain Travel Map) you get global map portfolio which very easy to use.

Spain (Spanish: Espana), officially the Kingdom of Spain (Spanish: Reino de Espana), is a country in Southwestern Europe with some pockets of territory across the Strait of Gibraltar and the Atlantic Ocean.

This geographical template allows you to customise every small part of template because everything is created inside After Effects.

The clean map template for the online map of your firm/forum/offices or the meetup place that you offer.

24/7 item support if you have any complexity with this Spain Map – Kingdom of Spain Travel Map project feel free to contact us via profile E-mail form. we will answer to you as soon as possible.

Spain Map – Kingdom of Spain Travel Map is 100% animated? Each and every scene including the awesome premium color controls a fully responsive.

The audio file you can find here: map advertisement music

Image used on screens are not included clean content

Spain Map – Kingdom of Spain Travel Map — supports After Effects CS 5.5 and above

View Portfolio
1 Sale
3 Comments
Item Rating:   Minimum of 3 votes required
© All Rights Reserved clean-promo-max
Contact the Envato Market Help Team
by
by
by
by
by
by