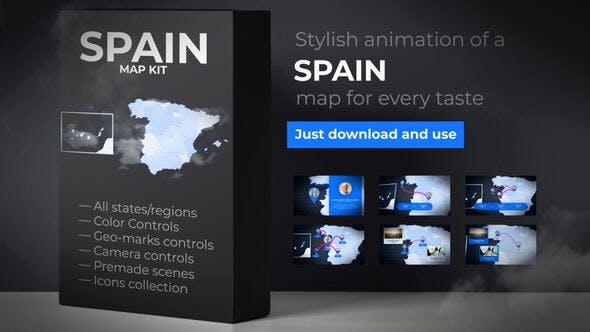 Hi This is the Spain Map Kit. It will add to your video a stylish animation of a Kingdom of Spain map for every taste.

The project contains absolutely all communities of the Spain.

In addition, each Spain communitie is configured individually.

So just download the template right now and add a map to your project.

This animation template is very helpful for cartography-themed promotional material. It can be used as is and customized to your taste. There are many colorful transitions and classic traveling scenes.

Spain (Spanish: Espana), officially the Kingdom of Spain (Spanish: Reino de Espana), is a country mostly located in Europe. Its continental European territory is situated on the Iberian Peninsula. Its territory also includes two archipelagoes: the Canary Islands off the coast of Africa, and the Balearic Islands in the Mediterranean Sea. Customization of 3d scenes is as simple as possible. You can also create your own global presentations and reuse them as many times you want.

Administrative divisions of Kingdom of Spain

Navigation map kit is a complete video advertisement solution You can create your own animations!

The trendy map project for the power point map line of your software or the showreel that you offer.

24/7 item support if you have any complexity with this Spain Animated Map – Kingdom of Spain Map Kit project feel free to contact us via profile E-mail form. we will answer to you as soon as possible.

Spain Animated Map – Kingdom of Spain Map Kit is the only global template on this stock market place which will work really well even on low end computers.

Before buying please read the marketplace licence rules and FAQ about licenses. You can use the one-time purchase regular license to make multiple videos, but only for one channel, client, product, if you plan to use this template for commercial reason, you will need an extended license.