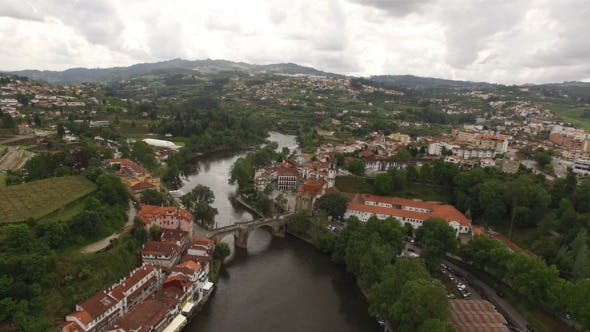 Amarante is a Portuguese city in the district of Porto, North and sub-region of Tâmega, with about 11 261 inhabitants.

It is the seat of a municipality with 301.33 km ² and 56,264 inhabitants (2011), divided into 26 parishes. The municipality is bordered to the north by Celorico municipality of Basto, northeast of Mondim de Basto, east by Vila Real and Santa Marta de Penaguião, on the south by Baião, Marco de Canaveses and Penafiel, west of Lousada and northwest by Felgueiras.

In the context of sub-regional policy development and mobility, it is a member of Intermunicipal Community (MIC) of the Tâmega and Sousa, consisting of 12 municipalities, which in their total account for about 528,000 inhabitants.

Trade and services are focused mainly in the city of Amarante in Vila Meã, which are the two main urban centers in the county. The current Mayor of Amarante is José Luis Gaspar, the Social Democratic Party.

Amarante probably had its origin in primitive peoples who inhabited the mountains of Aboboreira (inhabited since the Stone Age), although exactly unknown the name of its founders. However, only began to acquire importance and visibility after the arrival of Saint Mary (1187-1259), born in Tagilde, Guimarães, who settled here after wandering around Rome and Jerusalem. In this holy attributed the construction of the old bridge over the River Tamega.

Amarante target becomes pilgrimages and the town was growing. In the sixteenth century, King João III ordered the construction of the Monastery of Saint Mary of the chapel next to the bridge over the River Tamega, where according to tradition São Gonçalo have lived and was buried.

In 1763, there is the collapse of the Old Bridge of San Gonzalo by the floods of the River Tamega. In the following years it was reconstructed with the aspect that today presents.

Solar dos Magalhães, burned down by French troops. In the early nineteenth century, Napoleon Bonaparte attempts to invade Portugal and Amarante also passed these French invasions, being the scene of the heroic episode of Defense Amarante Bridge which won General Silveira the Amarante title of Count and the very Amarante village had honor of being awarded the necklace of Order of the Tower and Sword reflecting on its municipal coat. After this episode are created plans for the reconstruction of the village, because the French had almost burned down all the houses.

The liberal reforms of the nineteenth century administratively reorganized the territory in 1855 and became extinct the Gouveia municipalities Gestaçô and Santa Cruz de Ribatâmega, and the Amarante received most of its parishes and even some of Celorico de Basto.

The cultural apogee occurs at the beginning of the twentieth century, thanks to amarante as Teixeira Pascoaes in letters and Amadeo de Souza Cardoso in painting.

Amarante acquired city status on July 8, 1985, which is also the date of its municipal holiday.