Raindrops on the Window at Night (Stock Footage)

Raindrops on the Window at Night (Stock Footage) 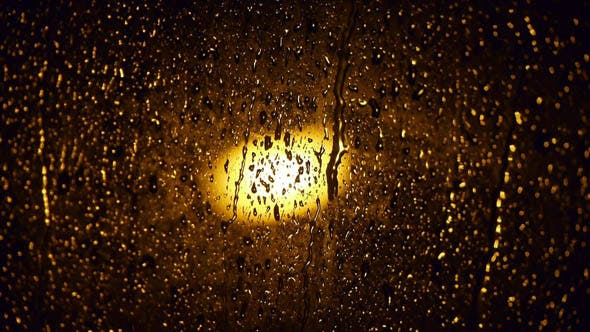 Great HD footage. Daytime and night time, zoom in zoom out and stabile versions of time lapse footages are available. A drop or droplet is a small column of liquid, bounded completely or almost completely by free surfaces. A drop may form when liquid accumulates at the lower end of a tube or other surface boundary, producing a hanging drop called a pendant drop. Drops may also be formed by the condensation of a vapor or by atomization of a larger mass of liquid. In Newtonian physics, free fall is any motion of a body where gravity is the only force acting upon it. In the context of general relativity, where gravitation is reduced to a space-time curvature, a body in free fall has no force acting on it and moves along a geodesic. The present article only concerns itself with free fall in the Newtonian domain. An object in the technical sense of free fall may not necessarily be falling down in the usual sense of the term. An object moving upwards would not normally be considered to be falling, but if it is subject to the force of gravity only, it is said to be in free fall. The moon is thus in free fall. Drop tear water raindrop droplet dropwise Rain raining rainy dropping. In a uniform gravitational field, in the absence of any other forces, gravitation acts on each part of the body equally and this is weightlessness, a condition that also occurs when the gravitational field is zero such as when far away from any gravitating body. A body in free fall experiences 0 g. Dribblet trickle dew splash natural nature falling storm stormy background. The term free fall is often used more loosely than in the strict sense defined above. Thus, falling through an atmosphere without a deployed parachute, or lifting device, is also often referred to as free fall. The aerodynamic drag forces in such situations prevent them from producing full weightlessness, and thus a skydiver’s free fall after reaching terminal velocity produces the sensation of the body’s weight being supported on a cushion of air. Tearing is the secretion of tears, which often serves to clean and lubricate the eyes in response to an irritation of the eyes. Tears formed through crying are associated with strong internal emotions, such as sorrow, elation, emotion, love, awe or pleasure. Laughing or yawning may also lead to the production of tears. Pouring wet glass shine weather home window apartment flat urban city. Water chemical formula: H2O is a transparent fluid which forms the world’s streams, lakes, oceans and rain, and is the major constituent of the fluids of organisms. As a chemical compound, a water molecule contains one oxygen and two hydrogen atoms that are connected by covalent bonds. Water is a liquid at standard ambient temperature and pressure, but it often co-exists on Earth with its solid state, ice; and gaseous state, steam water vapor. It also exists as snow, fog, dew and cloud. Water covers 71% of the Earth’s surface. It is vital for all known forms of life. On Earth, 96.5% of the planet’s crust water is found in seas and oceans, 1.7% in groundwater, 1.7% in glaciers and the ice caps of Antarctica and Greenland, a small fraction in other large water bodies, and 0.001% in the air as vapor, clouds formed of ice and liquid water suspended in air, and precipitation. Only 2.5% of this water is freshwater, and 98.8% of that water is in ice excepting ice in clouds and groundwater. Less than 0.3% of all freshwater is in rivers, lakes, and the atmosphere, and an even smaller amount of the Earth’s freshwater 0.003% is contained within biological bodies and manufactured products. A greater quantity of water is found in the earth’s interior. Water on Earth moves continually through the water cycle of evaporation and transpiration evapotranspiration, condensation, precipitation, and runoff, usually reaching the sea. Evaporation and transpiration contribute to the precipitation over land. Water used in the production of a good or service is known as virtual water. Safe drinking water is essential to humans and other lifeforms even though it provides no calories or organic nutrients. Access to safe drinking water has improved over the last decades in almost every part of the world, but approximately one billion people still lack access to safe water and over 2.5 billion lack access to adequate sanitation. There is a clear correlation between access to safe water and gross domestic product per capita. However, some observers have estimated that by 2025 more than half of the world population will be facing water-based vulnerability. A report, issued in November 2009, suggests that by 2030, in some developing regions of the world, water demand will exceed supply by 50%. Water plays an important role in the world economy, as it functions as a solvent for a wide variety of chemical substances and facilitates industrial cooling and transportation. Approximately 70% of the freshwater used by humans goes to agriculture. Please also check my portfolio for more travel videos. I have videos from over 50 countries, 1.000 cities.