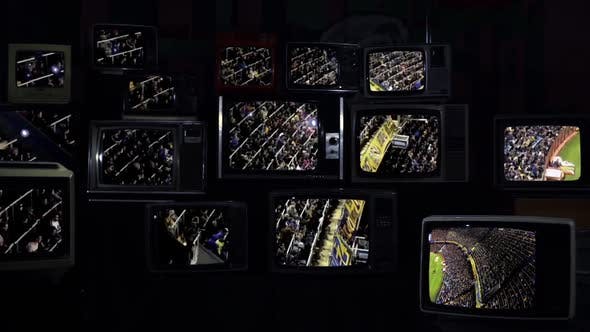 The Alberto J. Armando Stadium is a football stadium located in La Boca, Buenos Aires, Argentina. Widely known as La Bombonera (English: The chocolate box) due to its shape, with a “flat” stand on one side of the pitch and three steep stands round the rest of the stadium. The stadium is owned by Boca Juniors, Argentina’s top football club. The unusual shape of the stadium has led to it having excellent acoustics and the Boca support being nicknamed “(La Doce”). The pitch at La Bombonera is the minimum size required under FIFA regulations – 105m × 68m. The stadium is widely regarded as one of the most emblematic stadiums of the world, and has been declared of public interest by the Government of Buenos Aires autonomous city. The stadium, as well as being the home of Boca Juniors, who have over 16 million fans (the highest in Argentina), is also used as a concert venue. La Bombonera currently has a capacity of around 48,000 and the club’s popularity make tickets hard to find, especially for the Superclásico derby against River Plate. Diego Maradona, who played for and supported Boca Juniors, had his own executive box at the stadium. Full HD.