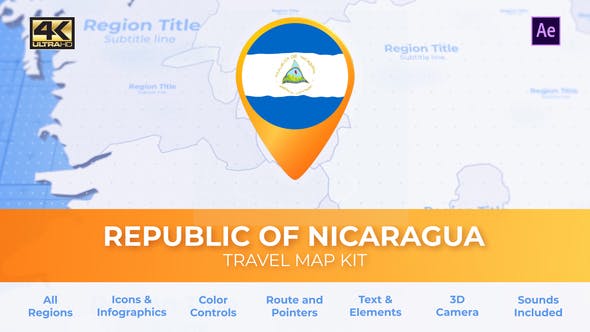 Nicaragua, officially the Republic of Nicaragua, is the largest country in the Central American isthmus, bordered by Honduras to the northwest, the Caribbean to the east, Costa Rica to the south, and the Pacific Ocean to the southwest. Managua is the country’s capital and largest city and is also the third-largest city in Central America, behind Tegucigalpa and Guatemala City. The multi-ethnic population of six million includes people of indigenous, European, African, and Asian heritage. The main language is Spanish. Indigenous tribes on the Mosquito Coast speak their own languages and English.

Originally inhabited by various indigenous cultures since ancient times, the region was conquered by the Spanish Empire in the 16th century. Nicaragua gained independence from Spain in 1821. The Mosquito Coast followed a different historical path, being colonized by the English in the 17th century and later coming under British rule. It became an autonomous territory of Nicaragua in 1860 and its northernmost part was transferred to Honduras in 1960. Since its independence, Nicaragua has undergone periods of political unrest, dictatorship, occupation and fiscal crisis, including the Nicaraguan Revolution of the 1960s and 1970s and the Contra War of the 1980s.

The mixture of cultural traditions has generated substantial diversity in folklore, cuisine, music, and literature, particularly the latter, given the literary contributions of Nicaraguan poets and writers such as Ruben Dario. Known as the “land of lakes and volcanoes”, Nicaragua is also home to the second-largest rainforest of the Americas. The biological diversity, warm tropical climate and active volcanoes make Nicaragua an increasingly popular tourist destination.

Let me present to you a my new project: Nicaragua Map – Republic of Nicaragua Travel Map

Design of the Nicaragua Map – Republic of Nicaragua Travel Map template is made to keep pace with the latest graphic design trends so you can buy more illustrations and elements from any seller on any marketplace and combine them with this 3dTheme seamlessly.

Nicaragua Map – Republic of Nicaragua Travel Map is 100% animated? Each and every scene including the awesome premium color controls a fully responsive.

24/7 item support if you have any complexity with this Nicaragua Map – Republic of Nicaragua Travel Map project feel free to contact us via profile E-mail form. we will answer to you as soon as possible.

View Portfolio
0 Sales
0 Comments
Item Rating:   Minimum of 3 votes required
© All Rights Reserved clean-promo-max
Contact the Envato Market Help Team
by
by
by
by
by
by