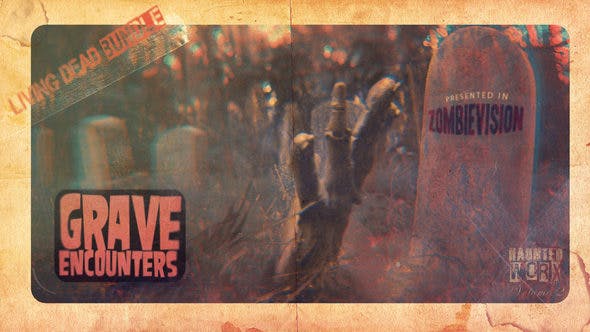 Music is NOT included. “Grave Encounters” Music Score by MAURO COLANGELO fits beautifully with the project. You have the craft of both a wonderfully fitting score along with fantastic sound effects mixed in. You can purchase Mauro’s score at Audiojungle.

GRAVE ENCOUNTERS: LIVING DEAD BUNDLE: GRAVE ENCOUNTERS is Volume 2 of the new After Effects Bundle “HauntedWorX” series. This is a throwback to old zombie films like Fulci’s 1979 “Zombie” and Romero’s 1968 “Night of The Living Dead”. Whats even better is that this bundle was shot at Evan’s City cemetery, the location where George Romero shot the classic zombie film that began all zombie films. Scroll down below to my “Geek Sheet”, which shows just some of the shots in the film and the shots in Grave Encounters. This certainly is not a selling point, rather my film geek mentality. Same location, and believe it or not, the same “Cross” prop still sits there. Okay, so enough with the film geek stuff. Lets get back to a bundle that is perfect for your next corporate presentation, wedding video, kids birthday party, kindergarden graduation video, and/or christmas video card! Look no further!

NOTE: THIS IS NOT FOR THE FAINT OF HEART! My After Effects Bundles are created using a standard 2010 macbook pro, 8GB. Nothing too powerful. Therefore, I can gage if I may be bulking up a Comp too much. So, Grave Encounters is no different. However, I would strongly suggest to have at least…....and I mean at least 4GB of RAM in your machine. The 4K Files are clean, crisp and lightweight in terms output and speed. So, as a file, you can work fast and smooth. However, some composites in here are pretty heavy and can way down the workflow speeds at times. So, with that, I would recommend having a good amount of RAM. 4G of RAM is okay, but you will get better workflow speed and faster renders with 8GB or more. However, I did break up the project into smaller units (LOTS) for folks that may have slower machines. But, it can get heavy at times depending on the comp.

This is a rasterized, composite-style project. So the footage, mattes, tracking does take a bit more render time and processing power. However, on that note, I think you will find you will learn plenty, and have fun doing it.

Even if you have little After Effects experience, the projects are extremely organized and simple to manipulate and re-create. To grab this bundle is a No Brainer…………….Yup, I wrote that! No Brainer….get it?

Fun & Simple to Work With! You don’t even need BRAINS!……yup……another zombie/brians…..reference……thing.

Quickly replace your text, add your name, and Mark your Grave!

All 50 Shots are Tracked 3D, so you can add more elements to each shot with ease!

The enormous 4K size offers freedom to design, composite or animate. The actual footage is very crisp, clean and huge! And better yet, the files have been transferred at a rate that will render fast and not eat up your system’s memory. Everything you need to give your project that CLASSIC CAMPY ZOMBIE FEEL.

IT’S SO EASY EVEN A ZOMBIE CAN DO IT!” Yup, I went there with that Zombie end note. Had too. Simple. Had too.