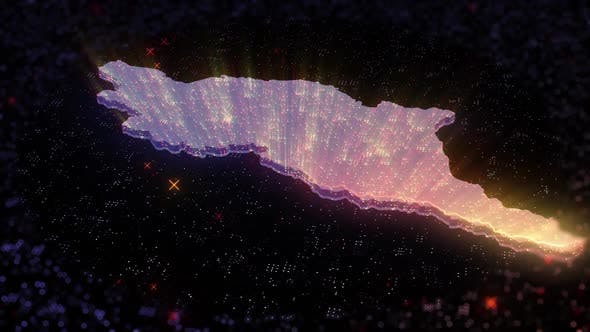 Digital Animated map of Georgia. Full Loopable, 30 second length, 25 frames per second. Georgia (Georgian: საქართველო, translit.: sakartvelo, IPA: [sɑkʰɑrtʰvɛlɔ] (About this soundlisten)), known until 1995 as the Republic of Georgia (Georgian: საქართველოს რესპუბლიკა, translit.: sakartvelos resp’ublik’a), is a country in the Caucasus region of Eurasia. Located at the crossroads of Western Asia and Eastern Europe, it is bounded to the west by the Black Sea, to the north by Russia, to the south by Turkey and Armenia, and to the southeast by Azerbaijan. The capital and largest city is Tbilisi. Georgia covers a territory of 69,700 square kilometres (26,911 sq mi), and its 2017 population is about 3.718 million. Georgia is a unitary parliamentary republic, with the government elected through a representative democracy.

During the classical era, several independent kingdoms became established in what is now Georgia, such as Colchis and Iberia. The Georgians officially adopted Christianity in the early 4th century. The common belief had an enormous importance for spiritual and political unification of early Georgian states. A unified Kingdom of Georgia reached its Golden Age during the reign of King David the Builder and Queen Tamar the Great in the 12th and early 13th centuries. Thereafter, the kingdom declined and eventually disintegrated under hegemony of various regional powers, including the Mongols, the Ottoman Empire, and successive dynasties of Iran. In the late 18th century, the eastern Georgian Kingdom of Kartli-Kakheti forged an alliance with the Russian Empire, which directly annexed the kingdom in 1801 and conquered the western Kingdom of Imereti in 1810. Russian rule over Georgia was eventually acknowledged in various peace treaties with Iran and the Ottomans and the remaining Georgian territories were absorbed by the Russian Empire in a piecemeal fashion in the course of the 19th century. During the Civil War following the Russian Revolution in 1917, Georgia briefly became part of the Transcaucasian Federation and then emerged as an independent republic before the Russian army invasion in 1921 which established a government of workers’ and peasants’ soviets. Soviet Georgia would be incorporated into a new Transcaucasian Federation which in 1922 would be a founding republic of the Soviet Union. In 1936, the Transcaucasian Federation was dissolved and Georgia emerged as a Union Republic. During World War II, almost 700,000 Georgians fought in the Red Army against the Germans. After Soviet leader Joseph Stalin, a native Georgian, died in 1953, a wave of protest spread against Nikita Khrushchev and his de-Stalinization reforms, leading to the death of nearly one hundred students in 1956. From that time on, Georgia would become marred with blatant corruption and increased alienation of the government from the people.[citation needed]

By the 1980s, Georgians were ready to abandon the existing system altogether. A pro-independence movement led to the secession from the Soviet Union in April 1991. For most of the following decade, post-Soviet Georgia suffered from civil conflicts, secessionist wars in Abkhazia and South Ossetia, and economic crisis. Following the bloodless Rose Revolution in 2003, Georgia strongly pursued a pro-Western foreign policy; aimed at NATO and European integration, it introduced a series of democratic and economic reforms. This brought about mixed results, but strengthened state institutions. The country’s Western orientation soon led to the worsening of relations with Russia, culminating in the brief Russo-Georgian War in August 2008 and Georgia’s current territorial dispute with Russia.

Georgia is a member of the United Nations, the Council of Europe, and the GUAM Organization for Democracy and Economic Development. It contains two de facto independent regions, Abkhazia and South Ossetia, which gained very limited international recognition after the 2008 Russo-Georgian War. Georgia and most of the world’s countries consider the regions to be Georgian territory under Russian occupation.