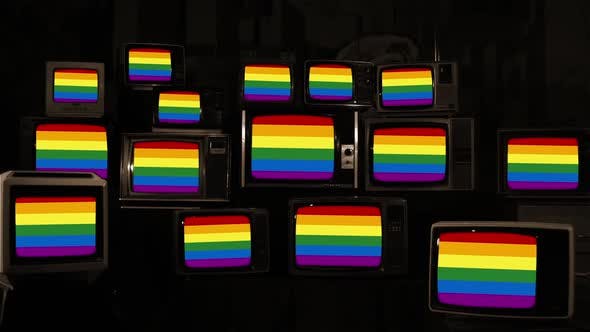 The rainbow flag, commonly known as the gay pride flag or LGBTQ pride flag, is a symbol of lesbian, gay, bisexual, transgender, and queer (LGBTQ) pride and LGBTQ social movements. Other older uses of rainbow flags include a symbol of peace. The colors reflect the diversity of the LGBTQ community, as the flag is often used as a symbol of gay pride during LGBTQ rights marches. While this use of the rainbow flag originated in San Francisco, it is now used worldwide. Originally devised by artist Gilbert Baker, the design has undergone several revisions since its debut in 1978, first to remove colors then restore them based on availability of fabrics. The traditional and still most common variant consists of six stripes: red, orange, yellow, green, blue, and violet. The flag is typically flown horizontally, with the red stripe on top, as it would be in a natural rainbow. Currently LGBTQ individuals and allies use rainbow flags and many rainbow-themed items and color schemes as an outward symbol of their identity or support. The rainbow flag is also commonly used as a general symbol of social equality and individuality. Sepia Tone. Full HD.