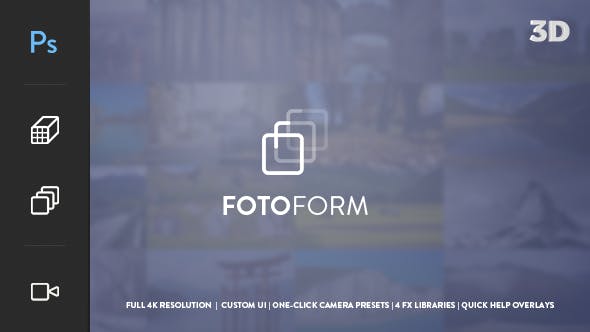 Transform flat 2D photo layers into full 3D geometry, effortlessly. If you’re a video producer needing affordable b-roll in a hurry, FotoForm will transform your photos into timeline moments. If you’re a photographer struggling for attention in a busy space, why not reinvent your art into attention-grabbing 3D motion? Or perhaps you’re just a creative person who happens to take photos with a smartphone. FotoForm doesn’t just extend the life of your photos – it creates entirely new realms of immersion.

Over 3,500 hours were dedicated to the proprietary process between a small team of people, all running inside what has become the most popular tool for modern motion graphics – Adobe After Effects. Creating video has never been so easy. Forget about the challenges normal video production entails: lighting, weather, recording, directing, timing. All you need is a photo to get started and FotoForm provides everything else.

FotoForm unleashes your creativity with the click of a button. Dictate the depth and complexity of any photo layer inside After Effects and produce your own 3 second video sequences in the simple step-by-step FotoForming system.

FotoForm has been tested in CC14 and CC15. While CS4, CS5, CS6 and CC12 were planned to be compatible originally, it became clear throughout development that these older versions didn’t quite have was needed to deliver on the full FotoForm experience. Regretfully, we can’t troubleshoot for these older versions of AE and invite you to consider updating. The last few AE updates to CC have made several big performance improvements for 3D work in After Effects, with a new C4D-based 3D renderer coming very soon, so if you’re doing anything other than 2D work I’d recommend the latest versions.
Show More Show Less