Flag of Anchorage, Alaska, on Retro TVs. Add to cart $15 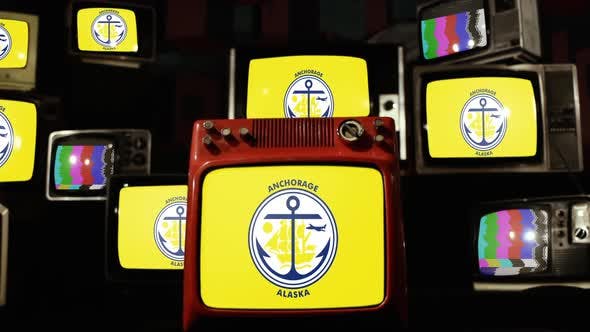 Anchorage (Dena’ina: Dgheyay Kaq’; Dgheyaytnu) is a unified municipal consolidated city-borough in the U.S. state of Alaska, on the West Coast of the United States. With a population of 291,247 in 2020, it is Alaska’s most populous city and contains nearly 40% of the state’s population. The Anchorage metropolitan area, which includes Anchorage and the neighboring Matanuska-Susitna Borough, had a population of 398,328 in 2020, accounting for more than half the state’s population. At 1,706 square miles (4,420 km2) of land area, the city is the fourth-largest by area in the United States and larger than the smallest state, Rhode Island, which has 1,212 square miles (3,140 km2). Anchorage is in Southcentral Alaska, at the terminus of the Cook Inlet, on a peninsula formed by the Knik Arm to the north and the Turnagain Arm to the south. Due to its location, almost equidistant from New York City, Tokyo, and Frankfurt, Germany (via the polar route), Anchorage lies within 10 hours by air of nearly 90% of the industrialized world. For this reason, Ted Stevens Anchorage International Airport is a common refueling stop for international cargo flights and home to a major FedEx hub, which the company calls a “critical part” of its global network of services. The flag of Anchorage, Alaska was adopted by the city of Anchorage in 1973. It is a field of yellow with the seal of the city, which features a blue anchor in the foreground as well as a blue airplane, yellow sun, and yellow sailboat in the background. The words “ANCHORAGE ALASKA” are also present. Full HD.