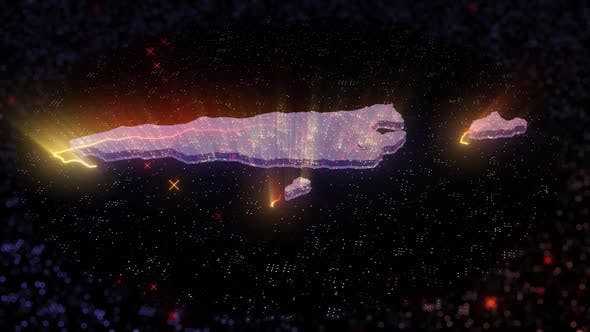 Digital Animated map of East Timor. Full Loopable, 30 second length, 25 frames per second. East Timor (/-ˈtiːmɔːr/ (About this soundlisten)) or Timor-Leste (/tiˈmɔːr ˈlɛʃteɪ/; Tetum: Timór Lorosa’e), officially the Democratic Republic of Timor-Leste11 (Portuguese: República Democrática de Timor-Leste,[12] Tetum: Repúblika Demokrátika Timór-Leste),[13] is a country in Maritime Southeast Asia.[14] It comprises the eastern half of the island of Timor, the nearby islands of Atauro and Jaco, and Oecusse, an exclave on the northwestern side of the island surrounded by Indonesian West Timor. Australia is the country’s southern neighbour, separated by the Timor Sea. The country’s size is about 15,007 km2 (5,794 sq mi).[7]

East Timor was colonised by Portugal in the 16th century, and was known as Portuguese Timor until 28 November 1975, when the Revolutionary Front for an Independent East Timor (Fretilin) declared the territory’s independence. Nine days later, it was invaded and occupied by the Indonesian military, and was declared as the country’s 27th province the following year. The Indonesian occupation of East Timor was characterised by a highly violent, decades-long conflict between separatist groups (especially Fretilin) and the Indonesian military.

In 1999, following the United Nations-sponsored act of self-determination, Indonesia relinquished control of the territory. East Timor became the first new sovereign state of the 21st century on 20 May 2002 and joined the United Nations and the Community of Portuguese Language Countries. In 2011, East Timor announced its intention to become the eleventh member of the Association of Southeast Asian Nations (ASEAN).[15] It is one of only two predominantly Christian nations in Southeast Asia, the other being the Philippines, as well as the only Asian country to be located completely in the Southern Hemisphere.