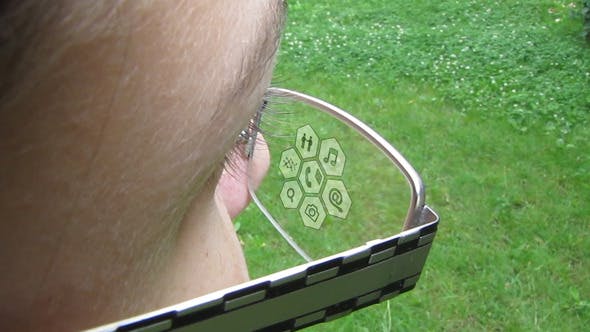 Three square dots cycle when the interface is loading.

When the interface is loaded, it expands into more hexagon items.

The hexagons are slightly out of sync, for the non linear feeling.

The fully loaded interface is formed from 7 hexagons, and each hexagon has one of the following icons: - phone call (with one reminder notification telling you to call mom) - music (two eight notes tied together) - email (at @ symbol with electric plug on one side) - camera (if you want to take a photo, perhaps) - search (magnifier glass) - internet (a network of dots, each dot being connected to at least another dot) - social (two iconic people shaking hand)

The interface makes its zoom to the center hexagon, reminding to call mother.

Then the interface closes.

The sound is not included, but you can get it separately here ($2 in June 2013): Small Steam Punk Machine by Holy Hammer

If you need any customization, contat me through my profile page.

Thank you all for your great work!