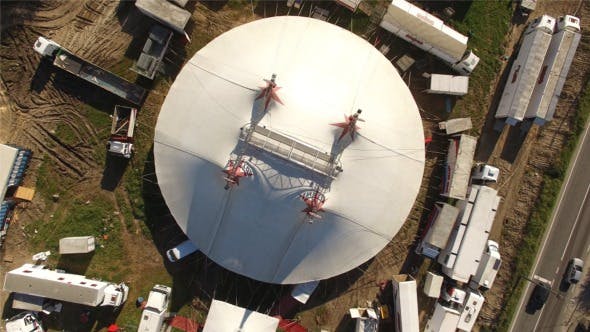 A circus (circus Latin, “circumference”) is commonly one in collective company that brings together artists from different specialties, such as juggling, clown, acrobatics, unicycle, contortion, balancing, illusionism, among others.

The word also describes the type of presentation made by these artists, usually a series of acts choreographed to music. A circus is held in an arena – circular arena with seating around it, while traveling circuses usually present in a large tent or canvas.

Chinese to the Greeks, the Egyptians to the Indians, almost all ancient civilizations have practiced some kind of circus arts for at least a thousand years, however, the circus as it is known today only began to take shape during the Roman Empire. The first to become famous was the Circus Maximus, which have been opened in the sixth century BC, with a capacity of 150 thousand people. The main attraction was the race of carriages, but with time, the gladiator fights were added, the wildlife presentations and people with unusual skills like fire-eaters. Destroyed by a great fire, this amphitheater was replaced in 40 BC, the Colosseum, the ruins of which today make up the postcard number one in Rome. Roma turn, has very important role in the history of the circus.

With the end of the Caesars empire and the beginning of the medieval era, popular artists began to improvise their performances in public squares, fairs and church entrances. “Thus were born the families of acrobats, traveling from town to town to present their comedic numbers, Pirofagia, juggling, dance and theater.”

All this, however, is only a pre-history of the circus arts, because it was only in the eighteenth-century England that emerged the modern circus, with its circular ring and the meeting of the attractions that make the show today. Knight 1 001 skills, English former military Philip Astley opened in 1768 in London, the Royal Amphitheatre of Arts (Real Amphitheatre of Arts) for equestrian exhibitions. To break the seriousness of the presentations, switched numbers with clowns and all kinds of acrobat and juggler.

It was so successful that, fifty years later, the English circus was imitated not only the rest of the European continent, but crossed the Atlantic and spread to the four corners of the earth.

The history of circus in Brazil began in the nineteenth century, with families and companies coming from Europe, where clustered in ghettos and demonstrating various feelings through theatrical interpretations which did not show only individual interests but aroused mutual awareness.

In Brazil, even before the Cirque Du Soleil, had the Gypsies who came from Europe, where they were persecuted. There has always been connecting Roma with the circus. Among his specialties included to tamers bears, illusionism and views with cavalos.Eles traveled from city to city, and adapted their shows to the taste of the local population. Numbers that were not successful in the city were taken from the program.

The new circus is a recent movement that adds to traditional circus techniques the influence of other artistic languages ??such as dance and theater, taking into account that music has always been part of the circus tradition. In Brazil there are currently several groups researching and using this new language.

According to the current people who are against the use of circus animals, its use has been gradually abandoned, since these animals often suffer abuse (such as serrated teeth poorly, lower cages, stress, etc.) and, in that, were often abandoned, as the maintenance of large animals such as tigers and elephants demand a lot of money. There are still numerous cases in which accidents, mainly involving wildlife, in which people leave injured or even killed, as the case of a Chinese girl, attacked by a tiger.

On the other hand there are numerous Brazilian circuses that have the infrastructure and resources to keep their animals with the aid of hired biologists and veterinarians to ensure the welfare of animals. Most of them with Ibama documentation.