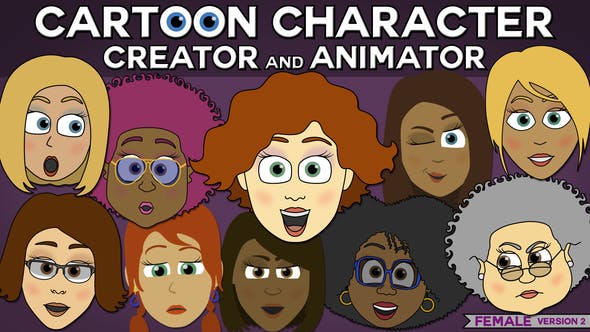 Create and animate your own cartoon characters with this powerful and intuitive After Effects project file!

Choose from over 50 different hairstyles, 35 face shapes, 40 noses, 20 eyebrows, plus a large selection of mouths, eyes, ears, earrings and even eye-wear. Or you can create and animate your own custom facial features. You’ll get incredible control to select and customize any item with easy to use expression-driven sliders and color pickers. Then just place your characters in the scene and you’re ready to animate!

Select and animate mouths with simple slider controls. A complete set of phoneme mouths are also included for detailed lip-synching to your dialogue audio files.

For business or pleasure, this Cartoon Character Creator and Animator is a powerful and fun tool with endless possibilities. Enjoy!

Position and rotation of eyes, eyebrows, and eyelids are animated via the icons seen to the right and left of your character’s head:

With complete control over the size and color of the stroke, give your character a classic ‘ink and paint’ look, or flat with no stroke:

Preserve Detail at Any Resolution:

Zoom in on your character and the image will look sharp and clear. All of the facial-features are After Effects shape layers, allowing you to scale up your character to any size and the details will look great:

Enormous amount of control for creating and animating facial-features, including 67 adjustable sliders for the eyes, with independent left/right eye controls. Each slider can be keyframed, resulting in professional-level facial animation.:

Several updates were added to version 2.0 of this project. Here are a just a few of the highlights:

This project is designed for creating and animating FEMALE cartoon character heads.

You can use the FEMALE version with the MALE version in your After Effects projects, giving you a total of up to 10 heads (5 male, 5 female) in one project file. Music is not included. Song is “Happy Ukulele 2” from beepcode: