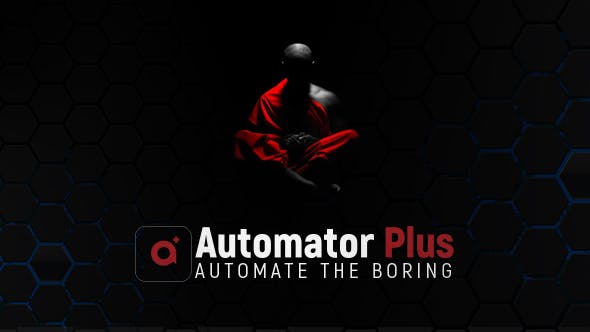 
Welcome to Automator Plus

We’ve spent years refining the art of automating tedious and boring tasks in your video editing workflow within Adobe Premiere Pro. Automator Plus is the automation software that is the result of this determination to automate the boring. Let us give you back valuable time to focus on the creative stuff and let AI automate the boring.


40 Automations in One Extension

We’ve identified some of the most tedious and boring workflows with Premiere Pro and created 40 automations with thousands of variations wrapped up in one extension. Some of the most notable automations you can assign keyboard shortcuts to include:

We have ten different algorithms to choose from when using the Auto Edit on Beat Automation. This new, state-of-the-art software allows you to create several different rough cuts in a matter of seconds. Mix and match different rough cuts and spend less time trying to figure out your basic timeline and more time refining it into a masterpiece.

Have you ever wanted to convert your footage into a stop motion clip? Now you can with a single click of a button. Our Create Stop Motion automation allows you to select which clips you want to convert, how long each frame in the stop motion effect should be and on which track you would like the Stop Motion to be added.

We have included three auto effect automations that create keyframes for you over an entire clip or for a subsection of a clip. The auto effects include Kenburns, Saturation and Shock Motion effects with various combinations.

Have you ever tried to stabilize multiple clips on the timeline at once within Premiere Pro? There are always some clips that are left out. Have you ever wanted to apply the warp stabilizer (or any other effect for that matter) sequentially one after the other? Now you can! With the Automator Plus, you can add Warp or Effect markers to your timeline and fire off an automation that will apply the effects one by one while you go and have a coffee letting the AI wait instead of you.

With Automator Plus you can automatically export all or your favourite frames on the timeline as screenshots in either JPG or PNG format.

Automator Plus also allows you to create and add custom transitions between two clips on the timeline.

Copying across all the video effects from one clip to multiple other clips on the timeline.


Easy to Use UI

Automator Plus uses state of the art web technologies to ensure a smooth UI experience. You can easily add, remove, group, delete, save, export and import your own automation configurations using the Automator Plus Premiere Pro Extension.

Not everyone has the same workflow, so we are putting you in the driver seat and allowing you to assign each automation to a keyboard shortcut. Not enough keys? No stress! Within Automator Plus each automation can be assigned to a group and shortcuts are only fired for the active group. What does this mean to you? You can assign the letter “K” to multiple automations, provided they are in different groups.

Automator Plus is easy to use for all levels of Premiere Pro users and ships with a default profile to help you hit the road running. There are easy to use automations like Beat Detection, Auto Edit and Export Screenshots as well as more advanced automations like adding your own Custom ExtendScript as an automation.

Automator Plus is Compatible with Mac & Windows and requires Premiere Pro 2020 or later to be installed. If you have multiple devices don’t fret, you can reuse your purchase on multiple devices.

If you encounter any problems setting up or using Automator Plus you can log a support ticket on our website or use the comment section on Envato to get in contact with us. Please feel free to reach out if you experience any performance issues or buggy behaviour.

Free updates are included in your purchase of the Automator Plus extension.