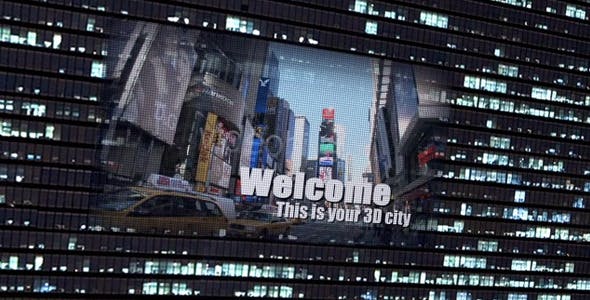 This project brings a 60 seconds long 3D City animation which includes 10 video walls. The animation flies you in the city and takes you to each video wall. It’s good to satisfy various needs.

It is easy to edit and it comes with a video help file. All you need to do is just to replace placeholders with your footage and change the text layers.

Project file does not include videos and audio used in the preview. If you like, you can go ahead and buy them from Envato market place.

I used two audio files from Audiojungle for the preview video. Here are these files: Modern News Countdown by D_Cooper Helicopter Engine Blades Loop by FX-HD-Flash

The panoramic city image used as the background of the animation is taken from Flicker. It is the work of Tom Merton (tommerton2010) and called Panoramas of American Megalopolis. Here is the link of the item: http://flic.kr/p/9d8nHr

The project comes with this background image.